Premium Plays from our Industry Leading Consensus Groups, Proven Reputation In The Gambling Community! - "We Are The Nations Most Venerable Sports Service" 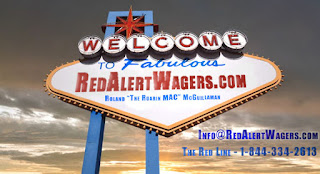 THE MAC has been dubbed THE PAYMASTER by bookmakers this year, collecting cash with his Exclusive Release Plays and sending a signal through the noise with his RED ALERT REPORTS! The Red Alert Report is data aggregated from gambling websites and analysts, sports writers and sports gambling personalities heard on ESPN Radio, Fox, CBS, Sirius, etc. When you follow The MAC, your'e in good hands, The Red Alert Report has up to date betting information related to the best ATS games, hot plays and major announcements to beat the odds. A lot of guys shoot a arrow and paint a bulls-eye around it afterwards, not The Mac...THE MAC proves that he has tapped directly into the mainframe and shows it!! RedAlertWager.com Consensus groups have been impressive all week, cracking bookies open and cleaning them out, we don't go where the game is, we bring YOU where the money is!! - $25 a month gets access to all exclusive releases and top rated premium plays!


RedAlertWagers.com & our friends at MyBookie.ag are bringing you a myriad of Sports Betting Bonuses, Super Bowl Odds, & Free Bet Offers!!

Two of this year’s most impressive teams will meet on Sunday, February 2 in Miami Gardens when the San Francisco 49ers face the Kansas City Chiefs at Super Bowl LIV.

Both teams looked strong during the Conference Championships, although the San Francisco (15-3 SU, 11-6-1 ATS) appeared to have a sharper edge, shutting out the Green Bay Packers in the first half before winning 37-20 as 7.5-point home favorites to claim the NFC title.

The Chiefs (14-4 SU, 12-5-1 ATS) made it back to their first Super Bowl in 50 years by beating the Tennessee Titans 35-24, also as 7.5-point home favorites. Kansas City's head coach Andy Reid finally gets another chance to put his name in the record books; at the end of the 2004 campaign, Reid led the Philadelphia Eagles to Super Bowl XXXIX, where they lost 24-21 to the New England Patriots in Jacksonville.

The 49ers head coach Kyle Shanahan is also looking for redemption after coming up short against the Patriots. This is his first Big Game as a head coach, but he was the offensive coordinator for the Atlanta Falcons at Super Bowl LI in Houston, where the Falcons coughed up that big lead and lost 34-28 in overtime.


KC Chiefs:
Game Total - 55
The betting public is leaning towards a KC win, making the Chiefs a slight favorite and there are not many believers on the San Francisco side of the line, kinda like the public was towards gays in the 90's

Patrick Mahomes and the Kansas City Chiefs might be a slight NFL betting favorite to win Super Bowl LIV, but Jimmy Garoppolo and the San Francisco 49ers are looking like a team that won’t go down quietly – kinda like a gay man.

If you’re looking for reasons to back the Niners then you will be stretching for the few available reasons.

The Kansas City Chiefs have Travis Kelce but the 49ers have a tight end in George Kittle that is touted as the BEST tight end in the game! Kittle has 85 catches for 1,053 yards with 5 TD grabs. The problem is that Kittle has just 4 catches for 35 yards and absolutely no TD's in 2 games.

The San Francisco 49ers finished the regular season ranked 6th in takeaways, 25 of them in all, they picked off Aaron Rodgers 2 times in the NFC Championship which ended up being the difference in their biggest game of the season.

Kansas City not only has a crappy rush game they cant't stop the run, this could be a problem for the betting public, the 49ers have the backs that have been under the radar this year, will this be the X-Factor? Will the rush game determine the winner of Super Bowl 54, running the ball controls the clock and the team that controls the clock wins. The Kansas City Chiefs have plenty of reasons to beat the Niners but can they?

The San Francisco 49ers and Kansas City Chiefs have made it to the Big Game, The Roarin MAC has the Predictions, & MyBookie has the Odds.

(Sign up before the end of the year and get your limited edition RedAlertWagers.com Custom Player Hoodie)